Before moving to the position of Practice Manager in July 2006, Shari began work for Sequoyah Animal Hospital as a Veterinary Assistant. In addition to handling human resources, payroll, and training of our support staff, she is also tasked with operating the Sequoyah K9 Academy located next door.

Shari has developed a love of training, especially her own German Shepherds, which she has competed with in multiple venues – obedience, protection and tracking. She has kept busy in this regard, titling several dogs under Service Dogs of America, IPO and AKC

Managing Sequoyah Animal Hospital’s bustling office takes someone with an eagerness to regularly learn new things and an ability to assist in different areas of the clinic. Since June 2008, Sarah has done just that. In addition to overseeing our receptionists, maintaining inventory, placing orders, and working on various projects, Sarah even fills in at our sister facility, Sequoyah’s Muddy Buddies Dog Wash, when needed.

“After seven years of working here, the staff has become more like family,” she says. “We spend long hours together and we have a willingness to work as a team. Also, our clients are very loyal and it has been great to form relationships with them and their pets.”

When she’s not at work, Sarah enjoys spending time with her husband, kayaking, and being outdoors. The couple has six dogs and a seven-year-old cat named Callie. The canine bunch includes two Basset Hounds, Clyde and Sissy; two Australian Shepherds/mixes, Stump and Haven; a Lab mix named Sped; and a German Shorthaired Pointer mix named Poncho.

“I like working at Sequoyah because everyone works as a team,” she says. “It is a team I want to be on and I am proud to be on it. We all pull together to care for each patient and take care of all the daily needs of the clinic efficiently.”

Alicia takes pride in being able to help each client and patient in whatever ways she can. She brings her friendliness and flexibility to the workplace and is responsible for providing top-notch customer service, maintaining our appointment schedule, and checking our patients in and out.

“Most of my free time is spent being a new mother,” she says. “We enjoy being outside and spending time with family and friends.”

Alicia also enjoys drawing, doing hair and makeup for family members when they need her services, and writing to her sister who is in the Navy.

Beth joined our team as a receptionist in July 2013. She is responsible for scheduling appointments, answering incoming calls, assisting our clients, filing, and checking our patients in and out.

A true “people person,” Beth most enjoys interacting with clients and their pets.

“I like working at Sequoyah Animal Hospital because I enjoy taking care of animals,” she says. “The doctors and staff have genuine concern over the health of everyone’s pet.”

Beth has a 10-year-old cat named Wilson, an eight-month-old Lab named Tara, and two turtles named Speedie and Slow Poke. She enjoys spending time with her family, reading, and being active on social media (Facebook specifically).

Linda joined our team as a receptionist in June 2015. She brings more than 35 years of veterinary experience to Sequoyah Animal Hospital.

Linda has both an associate’s degree in Veterinary Technology and certification in Veterinary Management from St. Petersburg College. She began her career as a veterinary technician/receptionist at Highland Animal Hospital in Florida in 1979. After working there for nearly two decades, she transferred to another hospital as a receptionist for more than 10 years. Prior to joining our team, she served as Practice Manager of Bluffs Animal Hospital in Florida beginning in April 2009.

“Sequoyah was the only animal hospital I sent a resume to,” she said of moving to Tennessee. “It helps that it is only three minutes from my house, but most importantly, the doctors and staff are amazing. We work as a team.” Linda is responsible for all aspects of customer service, including greeting clients, filing, answering incoming calls, and scheduling appointments.

When she’s not spending her free time bowling, fishing, or spending time with her husband, Linda has seven dogs and a cat to care for. Her canines range in age from 14-years-old to two years and include: a Pomeranian mix named Jasmine; an American Hairless Terrier named Tinker; a longhaired Dachshund named Phoebe; a Pomeranian named Stella; a West Highland White Terrier named Abbey; a terrier mix named Peanut; and a Lab named Bristol. The lone feline in a house full of dogs, her 14-year-old cat is named Shelia.

Margaret joined Sequoyah Animal Hospital in 2019 as a receptionist. Margaret is currently a Junior at UTC studying Biology. She is currently considering starting the Pre-Veterinarian program. Ever since she was young, she has wanted to work around animals. She states that “this has been the perfect hospital to introduce her to the animal field” and she could see herself loving and pursuing this field! Margaret has a kitten named Ryder that was rescued from a dumpster on her birthday. When not working Margaret loves hanging out with her friends and their fur babies. You can usually find Margaret in her “free-time” studying for her college classes while snuggling with Ryder.

Tori Roderick joined our team here at Sequoyah Animal Hospital as a receptionist in 2019. Tori has been working with animals for several years as she served as a pet sitter for a few years before starting with Sequoyah and also worked around horses gaining valuable experience. She is a self-starter and very outgoing. She loves working with people and can be counted on to come to work with a smile on her face. Tori has 1 dog named Riley a one-year-old mixed breed. When Tori isn’t working she loves playing and spending time with her 3-year-old son and riding horses (always looking for a reason to head off into the woods).

Brook Willoughby is a receptionist with South Rhea Animal Hospital where she started in 2019. She has been working in the animal field for 4 years. Brook loves working with animals and the staff at South Rhea Animal Hospital. She currently has 2 dogs Deizal, a 5-year-old Bulldog mix, and Vegas, a 2-year-old Rottweiler. When not at work Brook loves to spend time with friends and family, being outside and long walks with her pets.

Rhonda joined our team as a Veterinary Technician in March 2008. Her responsibilities include prepping our patients for exams, administering medications, obtaining specimens/samples, and assisting in the kennel and with grooming when needed.

“I like helping the animals, knowing I can make a difference!” she says. “I enjoy working for a team of doctors who truly care about helping and providing the best possible care to their patients.”

Rhonda previously worked at Pet Inn Kennels in Chattanooga as a boarding and grooming technician. She grew up on a farm and is the person we go to if we need someone to hold a pig or discuss the number of mites found on a chicken feather.

Outside of work, Rhonda likes to spend time with her husband and pets, as well as go hiking, camping, and fishing. She also enjoys reading and drawing. She has an 11-year-old Cattle Dog mix named Kalijah and a three-year-old cat named Thing Two.

Tami has been with Sequoyah Animal Hospital since 2017. Before working at Sequoyah Animal Hospital Tami was a volunteer at different animal shelters – she loves animals and receives great satisfaction from caring for them. Tami is always willing to help anyone in need and is a great asset here at Sequoyah Animal Hospital. She says that the reason she enjoys her work here so much is that “there is never a dull moment – you never know what will come through those doors!” She currently has 3 pets: Guinever, a 2-year-old Border Collie, Milo, a 3-year-old cat, and a axolotls. When Tami is not at work she enjoys raising axolotls, painting, sculpting, drawing, swimming at the lake, and spending time with her family. 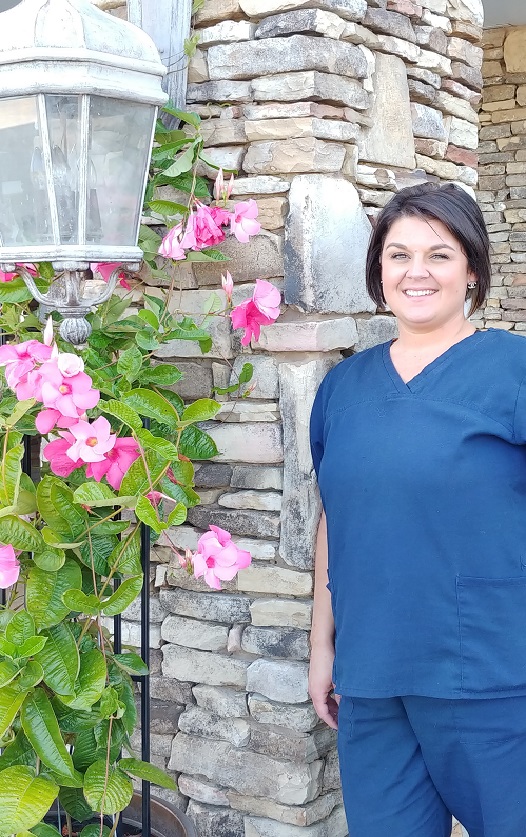 Brittany joined our team as a Veterinary Technician in July 2013. Her responsibilities include administering medications, assisting our veterinarians during exams, collecting samples, and filling in for our kennel technician when needed.

“I enjoy working with our clients and talking with them to ensure the needs of their pets are met,” she says.

Her prior experience includes time spent as an adoptions counselor and triage/caretaker associate at McKamey Animal Center in Chattanooga.

Jackie joined our team as a kennel technician and receptionist in October 2015. She cares for our boarding and hospitalized patients, answers incoming calls, schedules appointments and checks pets in and out of the hospital. She most enjoys meeting the many animals and learning their unique personalities.

She says of her position, “I strive to bring joy and happiness to all of our clients and patients.”

At home, Jackie has three cats, Spooky, Wolfman and Needa, and a Rat Terrier named Oreo. She spends her free time with her pets, or camping and hiking in the great outdoors, crafting, sewing, baking, building things, and playing video games.

Shantai has been with Sequoyah Animal Hospital for 3 years. She loves working with animals and taking care of your pets while boarding with us. She has a knack for remembering each and everyone – their likes and dislikes. This fact helps all of the pets settle here nicely while they are staying here with us. Shantai does not “just work in the kennels” however, she and Jackie both can frequently be found lending a helping hand to the technicians in the lab – setting up tests and soothing animals. Shanta currently has 2 rescues: a black German Shepherd named Onyx and a Pit-bull named Hitch. When Shanta is not at work she loves playing and hiking with her 2 children and her 2 dogs.